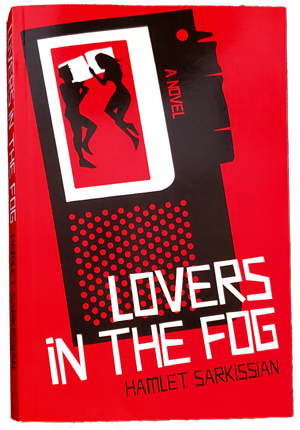 Los Angeles, February 14, 2019 — Love is in the air… but so is the cold war. Hamlet Sarkissian’s Lovers in the Fog (Page Publishing, April 2, 2019) intermingles a search for romantic completion with a quest for human rights in Gorbachev-era Russia. While the story is set in the late 80s, it is impossible to ignore the parallels with today’s tense political climate, where echoes of Cold War rhetoric emanate from news outlets and officials debate over America’s relationship with Russia.

As the son of a prominent dissident in Soviet Armenia (the former USSR), Sarkissian was unlikely to grow up and live in Los Angeles as a successful filmmaker/author. His father, Vache Sarkissian, was a political prisoner during the Cold War and spent 18 years in KGB prisons and Soviet Gulag labor camps as punishment for resisting the dictatorial and tyrannical central government.

Sarkissian was a first-hand witness to the unfolding drama derisively labeled the “Evil Empire” by United States president Ronald Reagan – where ordinary people tried to live their lives peacefully while Russian authorities responded with psychological warfare. Daily life as the son of a political prisoner shaped his worldview, but rather than normalizing the constant surveillance and fear, Sarkissian explored an internal drive to improve the human condition through art; as a young man he was accepted to the prestigious Leningrad Institute of Theatre, Music and Cinematography.

Finding life in the Soviet system unbearable after his father’s suicide in 1987, he emigrated to the U.S., sponsored by the International Institute of Human Rights. Here, he developed into a new breed of artist, passionate about justice and driven to tell vivid, unforgettable stories that awaken people to important issues lurking just below the surface – like his feature drama film “Camera Obscura” (2000).

Given the virulent political climate in the United States today, and the destructive polarization of the media, Lovers in the Fog offers an opportunity to hear unfiltered truths about Russia, Communism and the courageous dissidents who sacrificed their lives to share the truth.

Told from the point of view of Luke Forsythe, an American human rights attorney who goes to Russia to teach local dissidents how to reform their civil laws, the story opens with Luke embarking on a solo drive up the east coast of the United States to rendezvous with the love of his life, a mystery woman who went missing a decade before.

During the drive from Key West to Montauk, the open road provides Luke with a canvas upon which he paints his memories, desires and deepest fears. His love affair, his new family and his efforts to extricate dissidents from Gorbachev’s Russia are vividly remembered and parsed so he can filter truth from reality. The story is

filled with fascinating political history, real-life moments gleaned from personal experiences and valuable context for Communism and Socialism, which the media often portrays without important warnings of the dual dangers of far-left and far-right ideology. It is a layered and complex tale with a life-changing revelation awaiting Luke at the end of his trip.

Authenticity and truth shine through in Lovers in the Fog because every chapter is informed by the personal history of real witnesses to the pivotal events. The lead dissident character (Vasya Verbitsky) in the novel is modeled after Sarkissian’s courageous father. The book narrates a drama about life, love and suspense caught in a whirlwind across Russian and American political landscapes. The love story is punctuated with Eastern European settings and allure, along with the protagonist’s love adventures and intimate fantasies, calling to mind Milan Kundera’s Unbearable Lightness of Being… yet Lovers in the Fog is decidedly darker, immersed in real-life political intrigue and the geo-political implications of Cold War posturing.

An audiobook will be available in late April. Visit LoversIntheFog.com now for the cinematic audio experience.

Hamlet Sarkissian is an author, playwright and filmmaker, having written and directed the feature drama “Camera Obscura” (2000). Lovers in The Fog is his first novel. Born in 1962 in Yerevan, Armenia (formerly the U.S.S.R.), Hamlet is the son of prominent Soviet dissident and underground novelist Vache Sarkissian, who spent 18 years in Soviet gulag camps and KGB prisons. Life as the son of a political prisoner shaped Hamlet’s world view; he joined his father to fight communism even as his own artistic talents began to emerge. As a young man, his studies at the Leningrad Institute of Theatre, Music and Cinematography were cut short in the wake of his father’s 1987 suicide. Driven to leave the oppressive Soviet system, Hamlet later emigrated to the U.S. with sponsorship by the International Institute of Human Rights. He now lives in Los Angeles with his wife, French writer, Donatella Gomelsky-Guichard, and their three children. To learn more, visit hamletsarkissian.com.